As a psychologist I am interested in the way people think, learn and behave.

I am a retired Reader in Psychology, with a 25 year university research career, which started at the University of Cambridge.

I am the author of two books, and I have published peer-reviewed research papers on human memory, language, problem-solving, dance, Parkinson’s disease, rhythm and timing.

I love setting up experiments, testing ideas, and helping people to change the way they think. 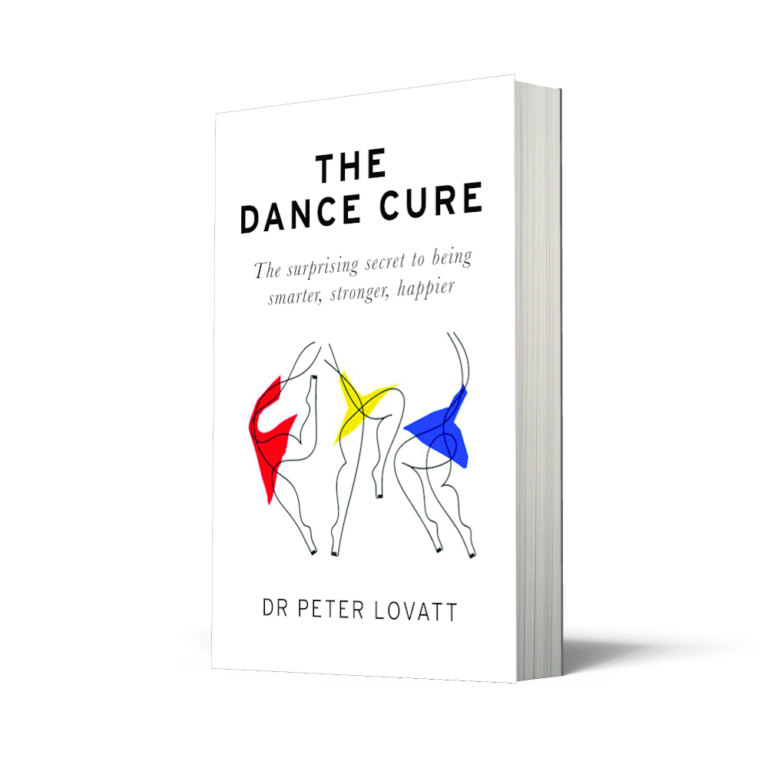 I was a university lecturer from 1994 to 2021, teaching at all levels, from open-access evening classes, to undergraduate, post-graduate and doctoral-level studies.

My teaching was recognised with a Vice-Chancellor’s award and one of my courses was commended by the British Psychological Society.

I continue to teach as a public speaker and through the Movement in Practice Academy – which I co-founded with Lindsey Lovatt.

I love to support people’s learning journey – wherever that journey takes them.

I was a professional dancer before I trained as a Psychologist.

I combined my passion for dance and my fascination with psychology in 2008 and set up the Dance Psychology Lab – where I carried out research in the Psychology of Dance and worked with people with Parkinson’s disease.

From what I learned from academic research, and my lived experience as a life-long dancer, I believe that dancing can have a profound, positive effect on people’s physical and psychological wellbeing.

With Dame Darcey Bussell I am the co-creator of Move-Assure – a brand new Dance for Mental Wellbeing Programme.

I love to help and see people move – it’s transformational.

Get Your Wellbeing Back

Hello and welcome to my website. On this page you'll find information and links to: 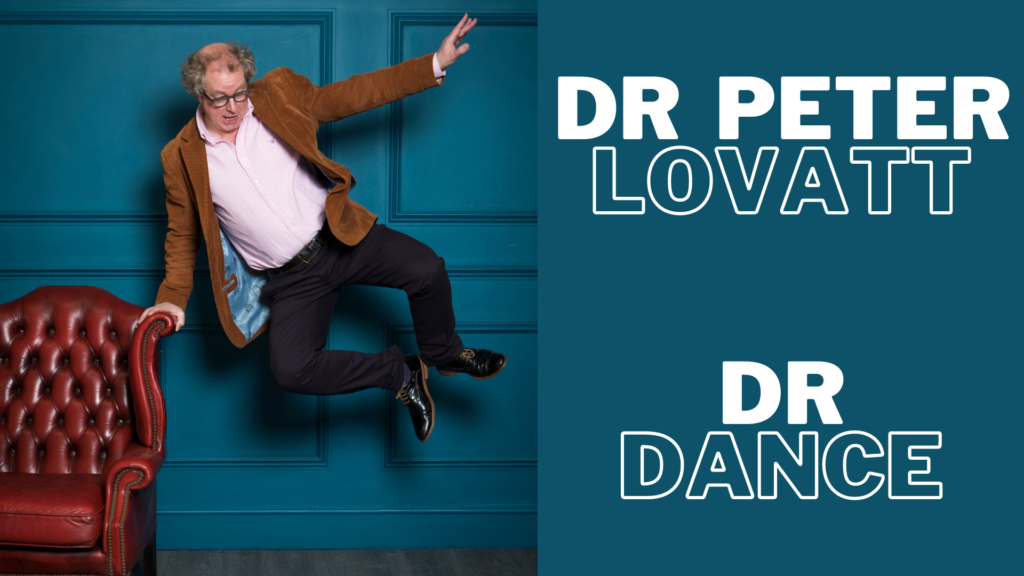 My name is Dr Peter Lovatt and I’m an academic Psychologist with a special interest in movement and dance. Before becoming a Psychologist, I was a professional dancer and I am sometimes known as DR DANCE. 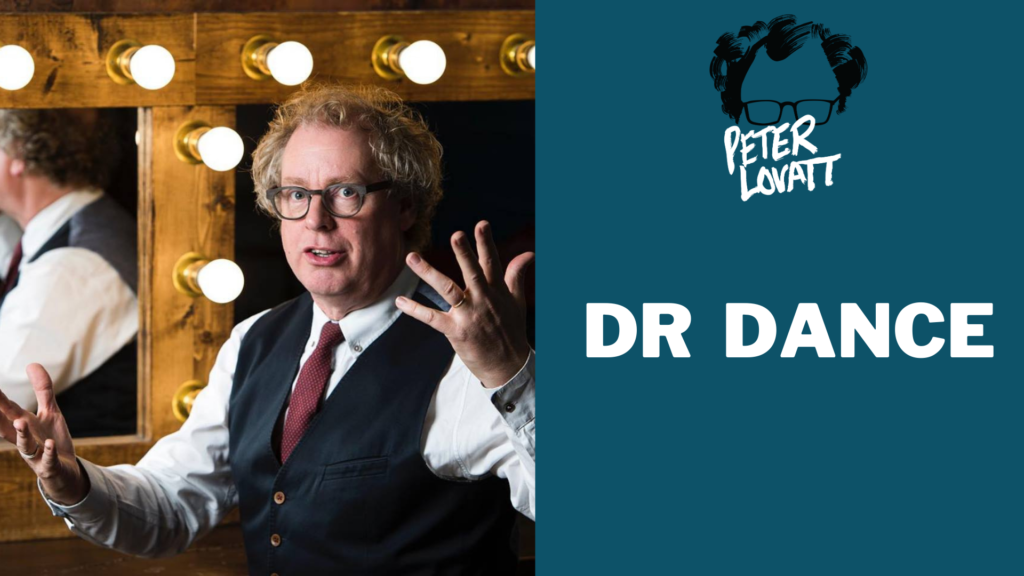 Dr Dance is an advocate for the positive impact of dance and movement in everyday life. I believe that encouraging people to dance and move more can lead to positive changes in our society, and it can help individuals to improve their physical and psychological wellbeing too.

I advocate for the positive impact of dance and movement by doing academic research, writing books, offering online courses, giving groovy keynotes, dancing and appearing in the media. 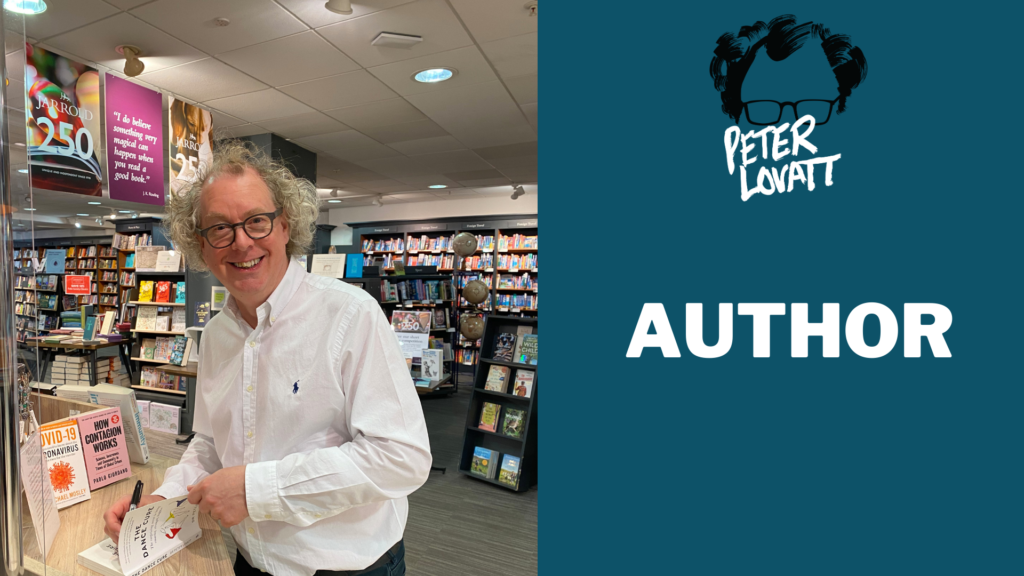 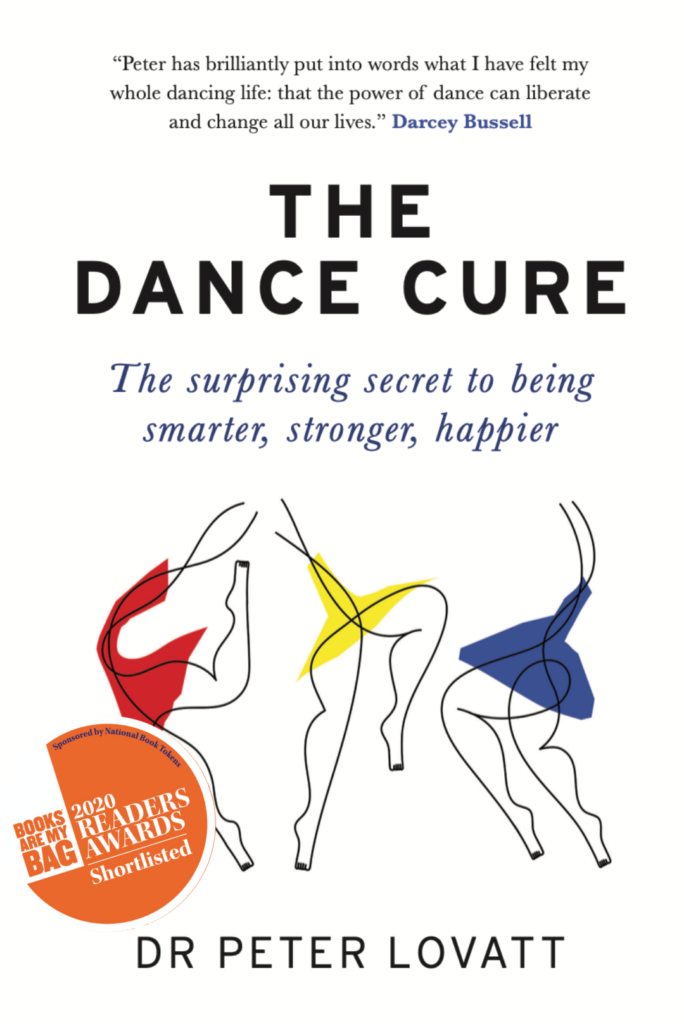 I’m the AUTHOR of THE DANCE CURE: the surprising secret to being smarter, stronger, happier (Short Books 2020) which was shortlisted for the Books Are My Bag Reader’s Award for Non-fiction, and listed as one of the Best Books of 2020 by The Observer.

THE DANCE CURE: the surprising science to being smarter, stronger, happier was published in the USA by HarperOne, an imprint of HarperCollins, in January 2021.

My first book was an academic textbook called DANCE PSYCHOLOGY: the science of dance and dancers and it was published in 2018.

(Actually, my very first book was a collection of poetry called To Whom it May Concern, which was published in 1990).

If you would like a signed copy of either The Dance Cure or Dance Psychology, please click here 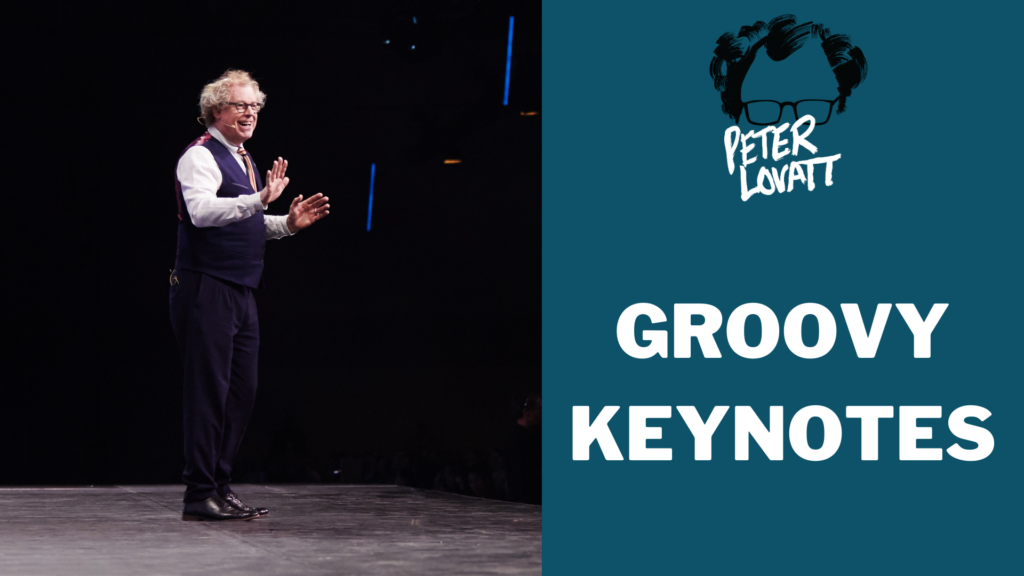 I give GROOVY KEYNOTES, both live and pre-recorded. I love being part of face-to-face, in-the-room, events. I’ve also created some off-the-shelf, pre-recorded keynote videos. 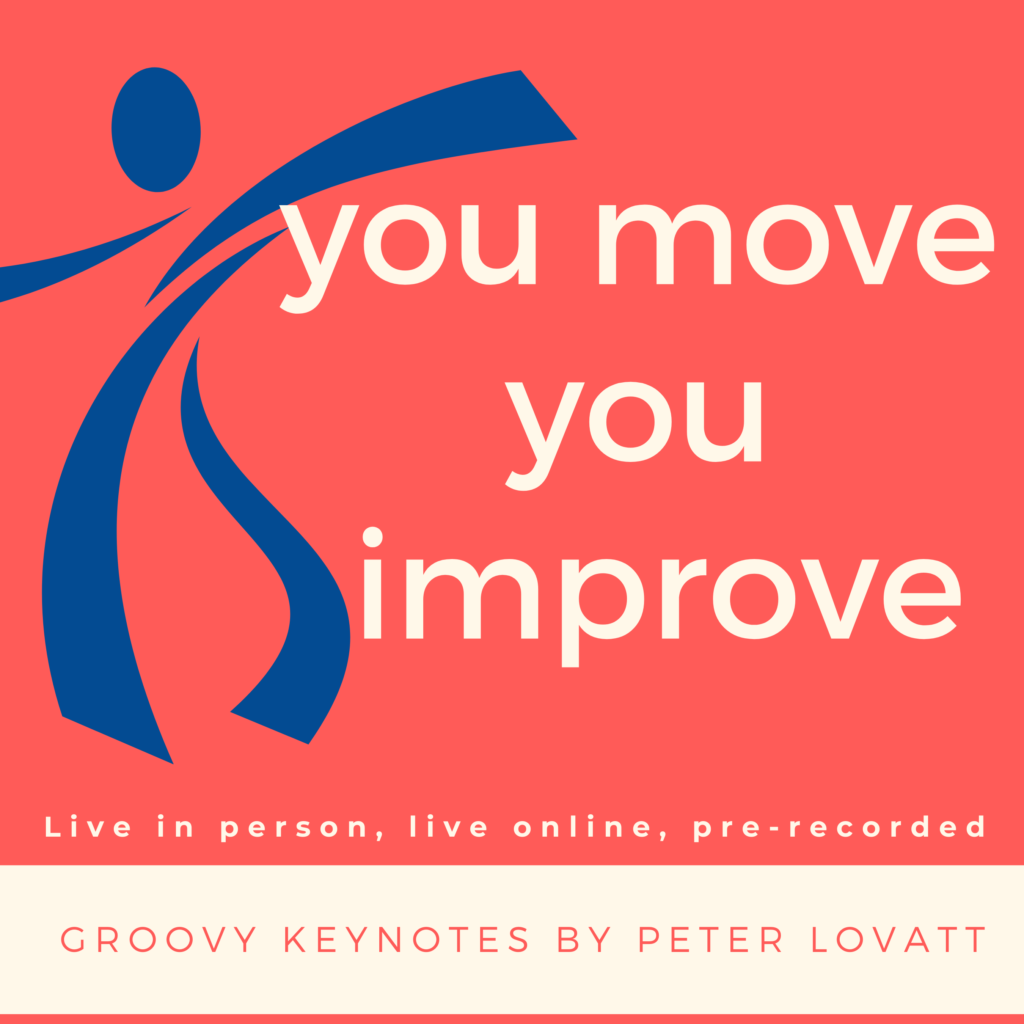 You Move You Improve

You Move You Improve – Do you want your audience feeling energised, happy and groovy – ready to be fully 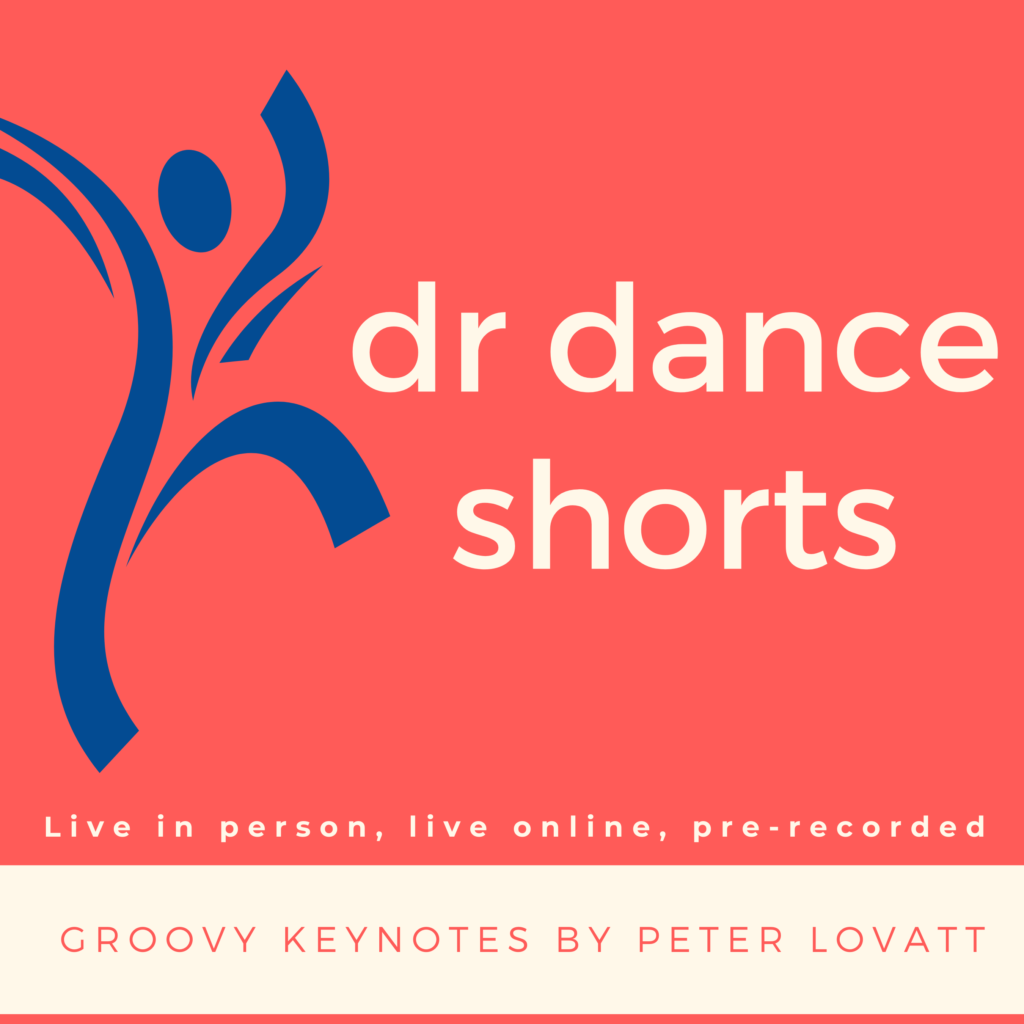 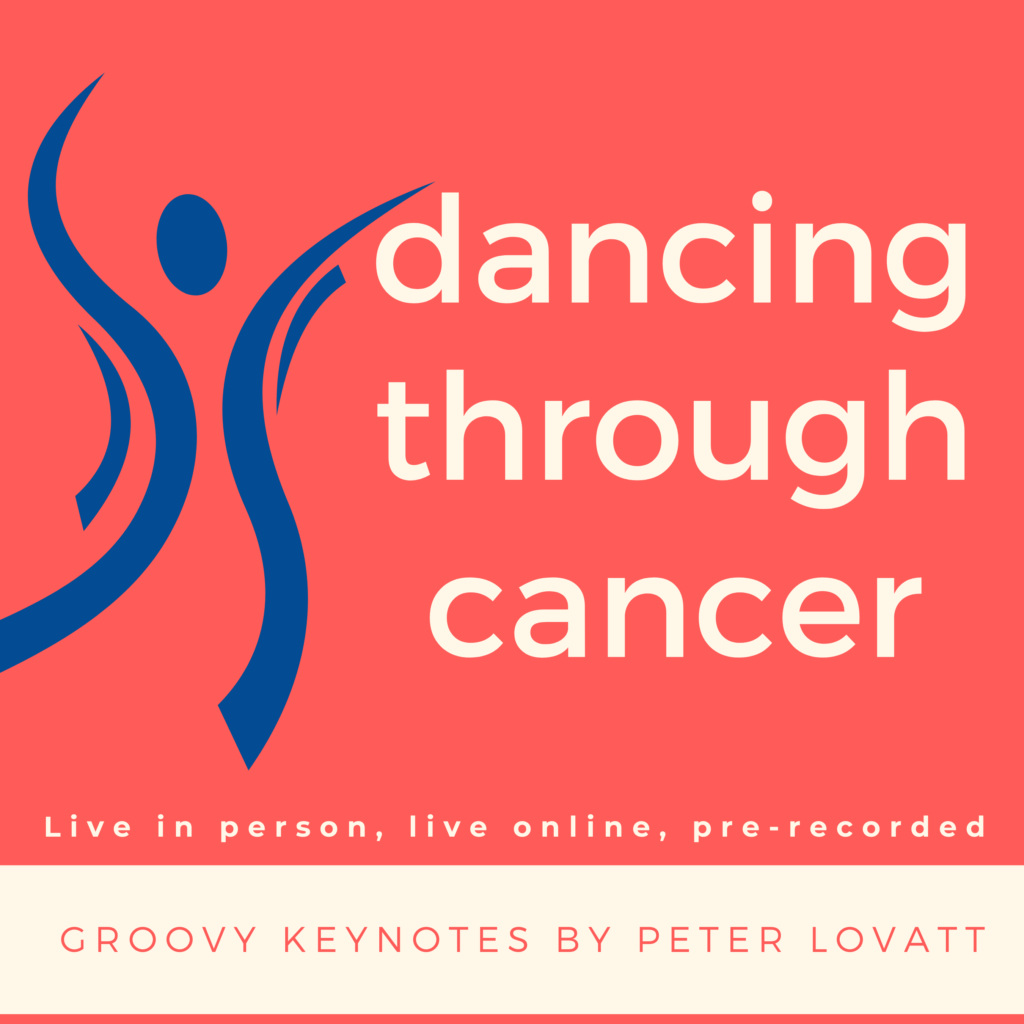 Dancing through Cancer – In this groovy keynote Peter Lovatt talks about how he used dance, alongside his medical treatment, 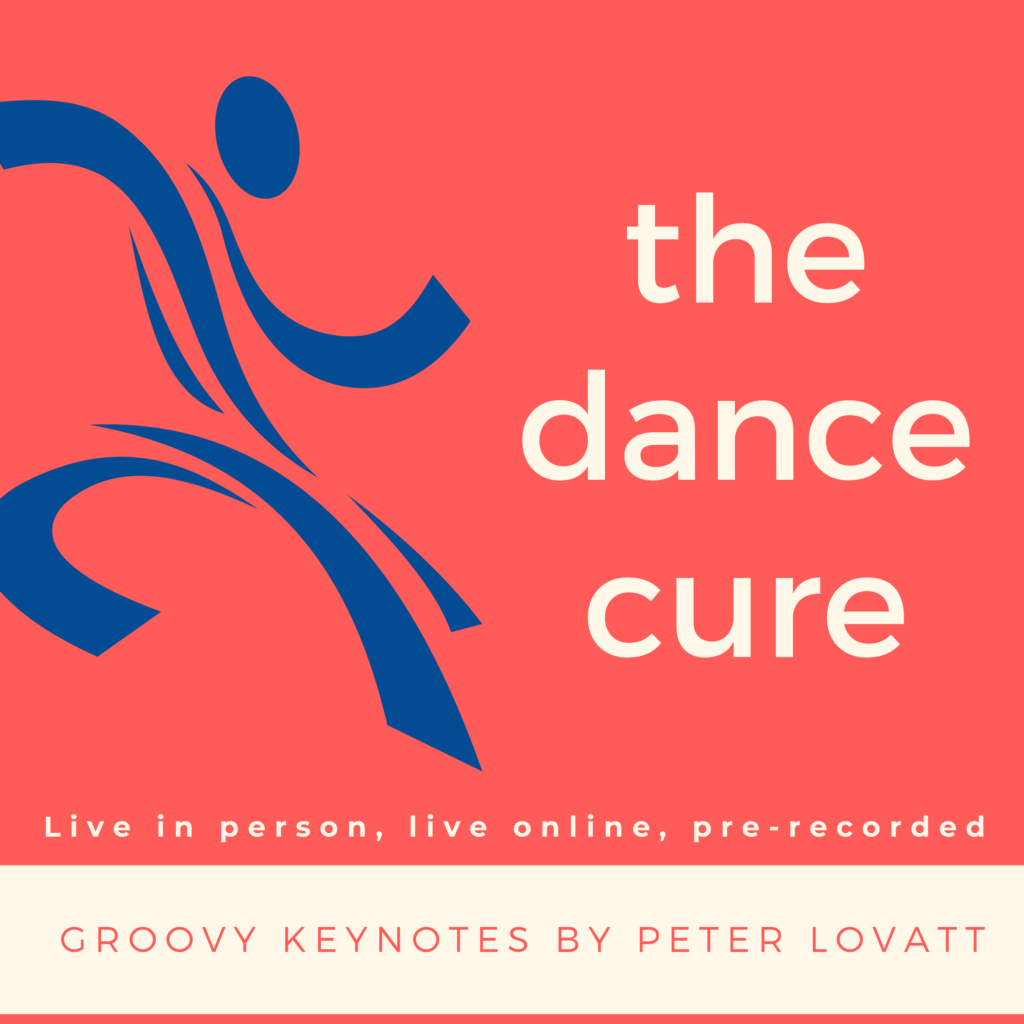 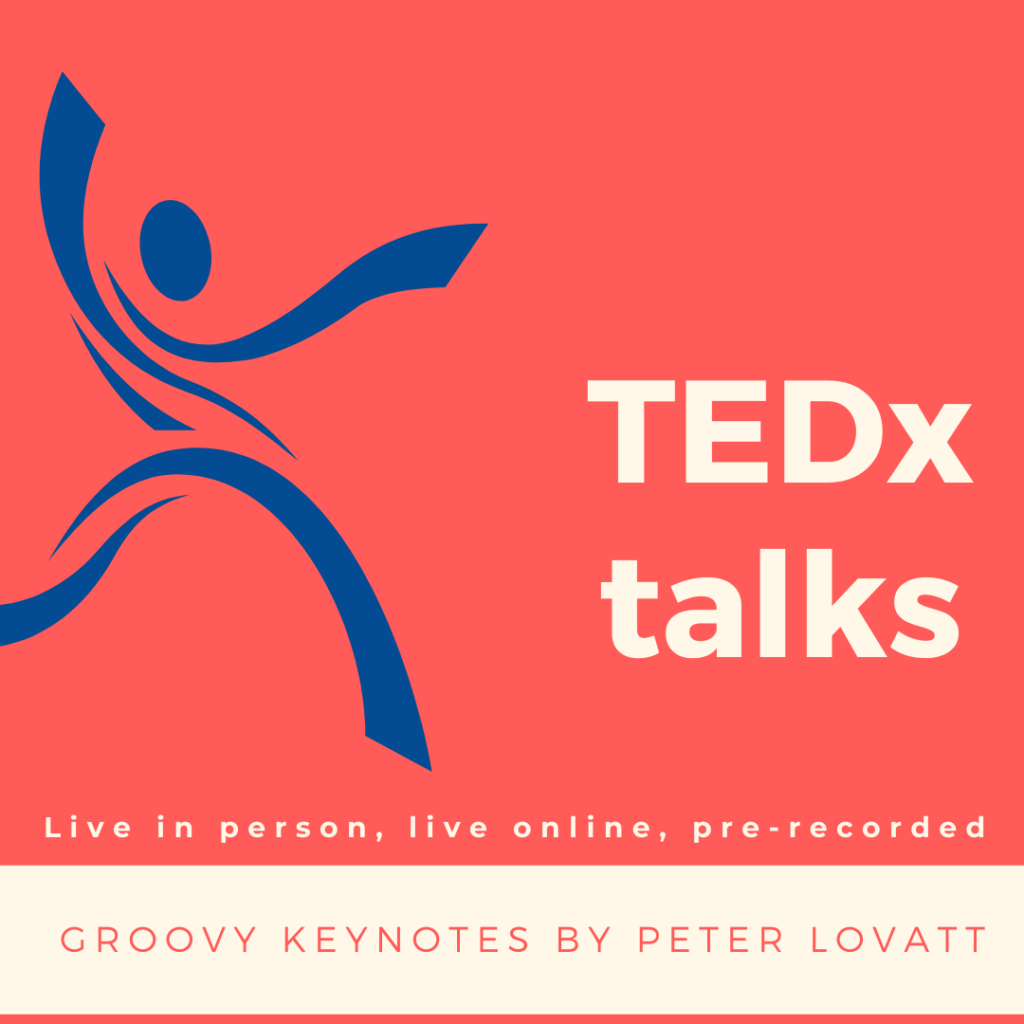 TEDx Talks – Dr Peter Lovatt has given five TEDx talks and dozens of TED-style talks. His first was TEDxBerlin

I have shared keynote sessions with world-leaders in business, politics, entertainment and sport, including the chat-show legend, Oprah Winfrey, the 44th President of the USA, Barack Obama, the founder of the Virgin group, Sir Richard Branson, the Oscar-winning actor, Geena Davis and the co-founder of Apple computers, Steve “the Woz” Wozniak.

I sometimes speak about how I overcame a severe reading difficulty as an adult and went on to win a post-doctoral position in the Faculty of English at Cambridge University. Overcoming repeated failure teaches us valuable lessons.

My keynotes are evidence-based, fun and groovy. 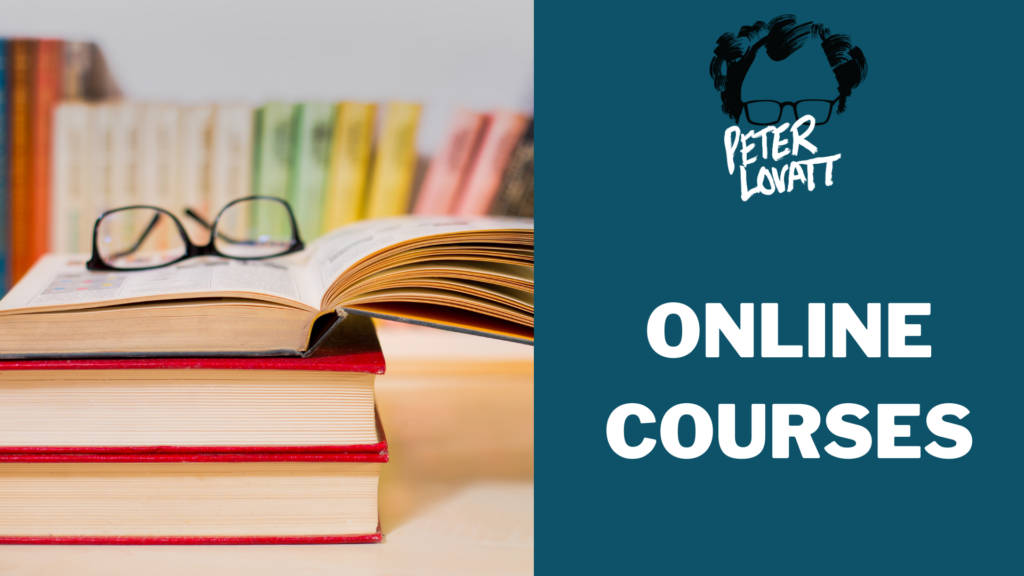 I am co-director of the MOVEMENT IN PRACTICE ACADEMY, where our focus is on providing education to help people improve lives in business, education, health and social care through movement and dance.  We’ve produced a series of online COURSES and we run zoom tutorials.

The MOVEMENT IN PRACTICE ACADEMY is an accredited provider of CPD-based education. We run short on-line courses and 8-week tutorial programmes. 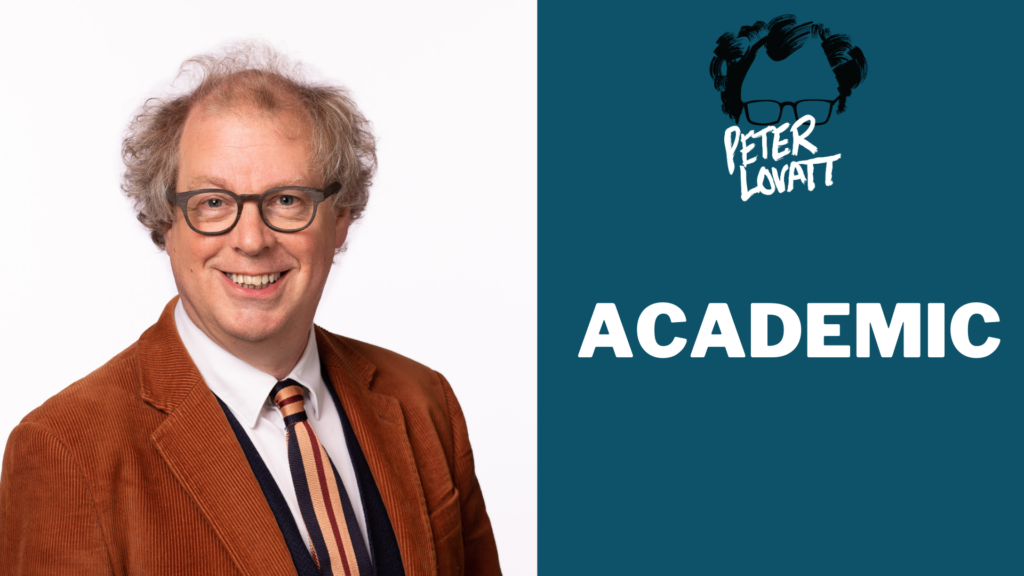 I started my ACADEMIC career as a university Teaching Fellow in 1994, and rose through the ranks of Lecturer, Senior Research Fellow, Senior Lecturer, Deputy Head of School, Reader and Director of the Dance Psychology Lab. I loved my years as a univeristy academic and researcher. I carried out academic research in experimental human psychology and dance and worked with some fantastic scientists trying to understand how the human brain processes information, what happens when the human brain degenerates, as happens in people with Parkinson’s disease, and what happens to the human brain and mind when people move and dance. I retired as a full-time University academic in 2019, to apply in business, education, health and social care settings, what I had leaned from 25 years of research. Though I couldn’t quite give it all up. I continue to teach and supervise students at the ROYAL BALLET SCHOOL 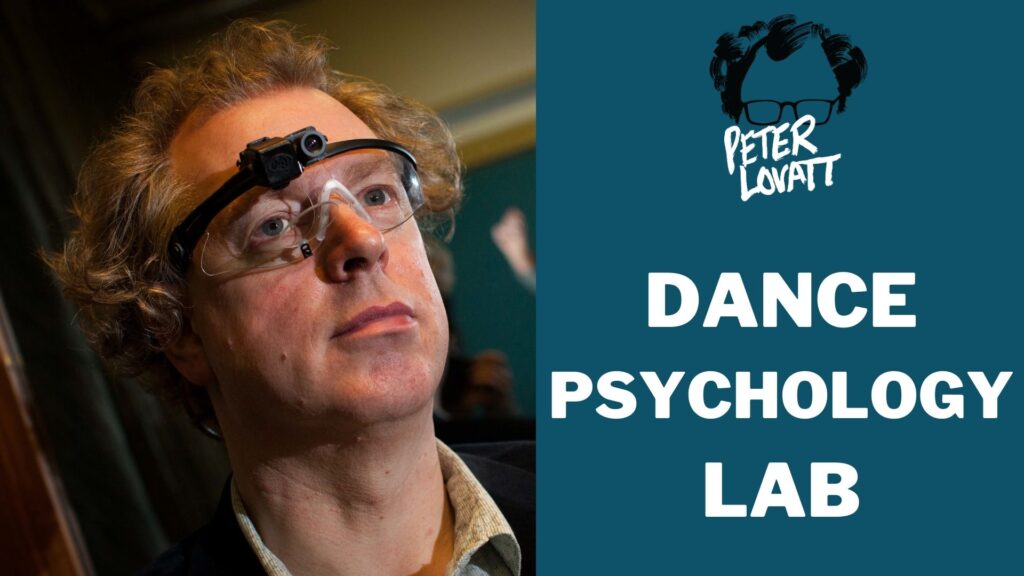 I was blessed to work with some fantastic BSc, MSc and PhD students, volunteers, dancers, dance teachers, post-docs, colleagues, collaborators and people with Parkinson’s.

The DANCE PSYCHOLOGY LAB is now the research arm of the MOVEMENT IN PRACTICE ACADEMY. 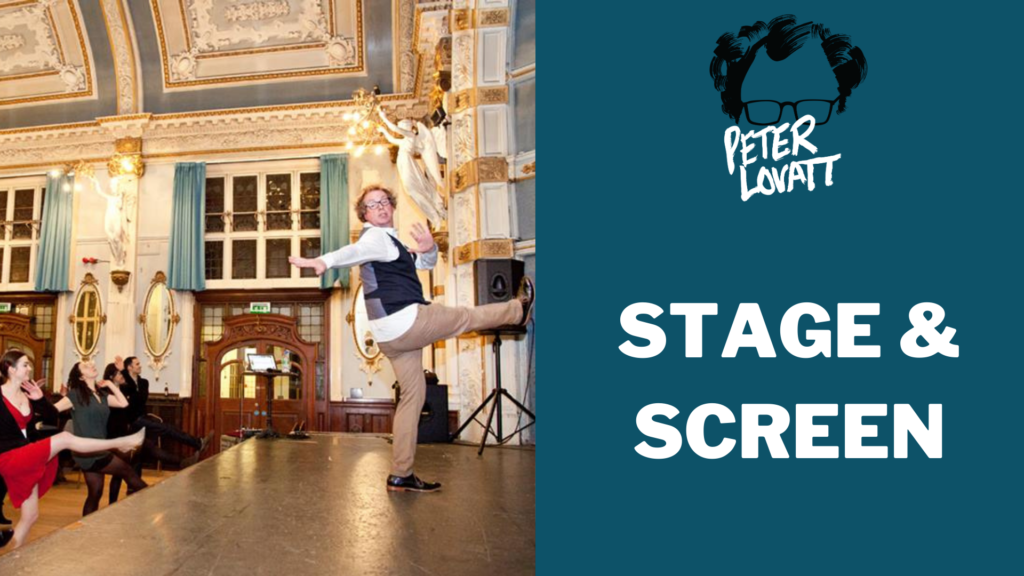 To advocate for the positive impact of dance and movement, I have made several shows for stage and TV under the name of DR DANCE. I was first referred to as the Doctor of Dance when I appeared on the GRAHAM NORTON SHOW (BBC TV) in 2008 and this quickly evolved to Dr Dance.

I wrote a show called DANCE DOCTOR, DANCE for the 2010 EDINBURGH FESTIVAL FRINGE and a year later created INSPIRED: PSYCHOLOGY DANCED in 2011.

In 2012 I had a TV show called DR DANCE commissioned by Channel 4 (Tiger Aspect) and spend 62 days filming with a rugby team, individuals and couples, whose lives we aimed to improve using movement and dance.

From 2010 to 2016 DR DANCE was a regular on popular TV shows such as STRICTLY COME DANCING: IT TAKES TWO (BBC2) and BIG BROTHER & CELEBRITY BIG BROTHER (CHANNEL 5).

In 2013 I made a taster for a TV show called BORN TO DANCE for BBC TV (Alaska) and in 2014 made another taster called DR DANCE for BBC2 (Alaska).

In 2015 DR DANCE went to Hollywood and we started work on another TV project, which became DR HAPPY. At the beginning of 2016 we got a commission from A&E network (Brian Graden Media) to make a pilot for the DR HAPPY TV show, which we filmed in the summer of 2016.

In 2018 I took DR DANCE on a national tour with a new show called BOOGIE ON THE BRAIN.

I spent 2019 planning a new TV show with SPECIAL TREATS and a new stage show on the links between dance, education and mental health.  Covid-19 stopped both projects in their tracks in early 2020.

I’m excited to see what DR DANCE does next. 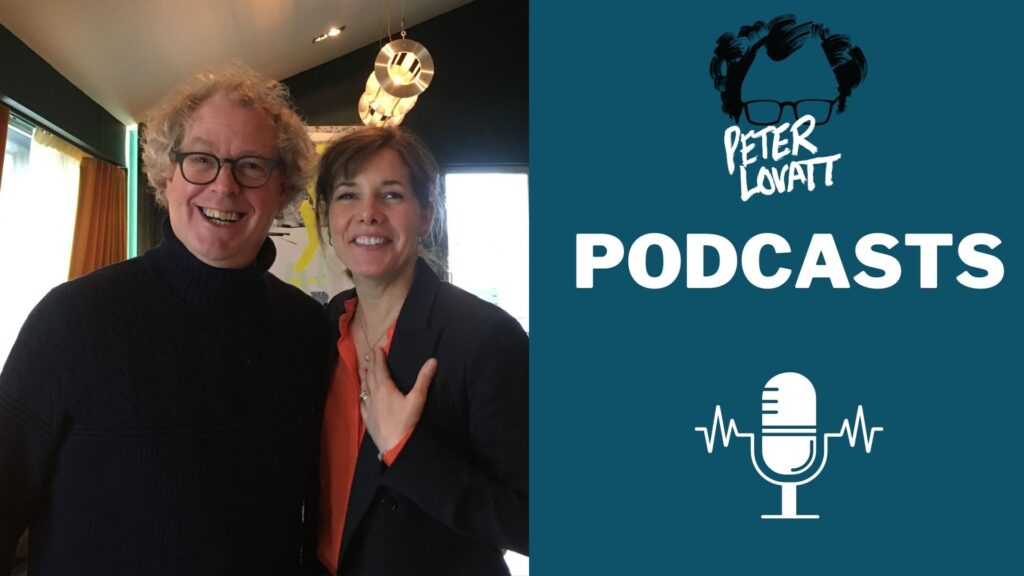 2020 was the year of the PODCAST. I was lucky enough to record six episodes of THE POWER OF DANCE podcast with Dame Darcey Bussell.

I have also been a guest on several other podcasts. 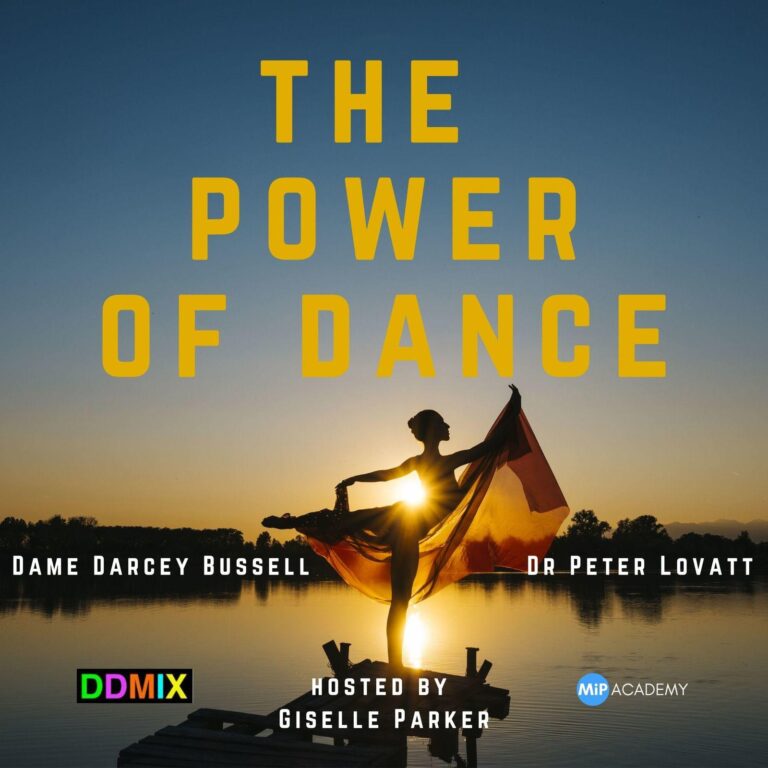 The Power of Dance

Join Dame Darcey Bussell and Dr Peter Lovatt in a series of conversations about The Power of Dance. Using their extensive knowledge and experience of dance we will be exploring the many benefits and attributes that dance can provide. Hosted by Giselle Parker.

Listen OnApple Podcasts
6: The Power of Dance – Episode 6 Dance for Health
byThe Power of Dance
Join Dame Darcey Bussell and Dr Peter Lovatt as they discuss the many health benefits of dance for health.
Hosted by Giselle Parker.

For all other enquiries including press:
info@diversedancemix.com 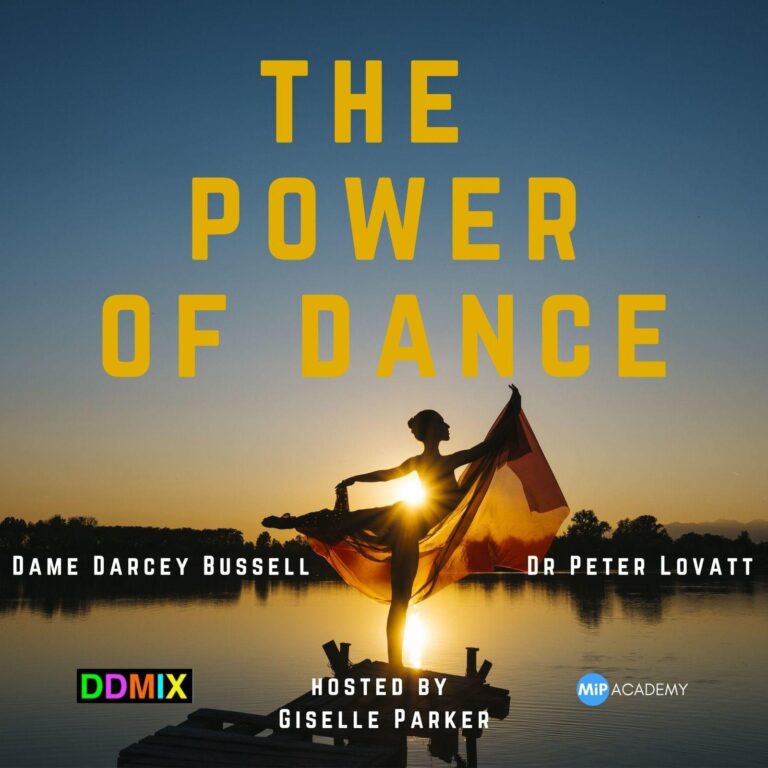 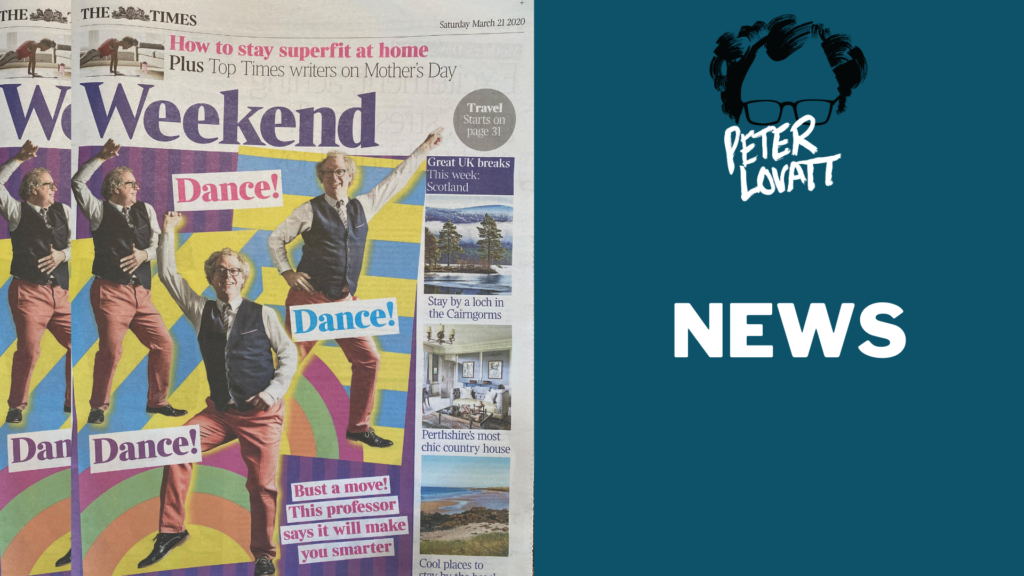 You can catch up on all my latest NEWS right here. 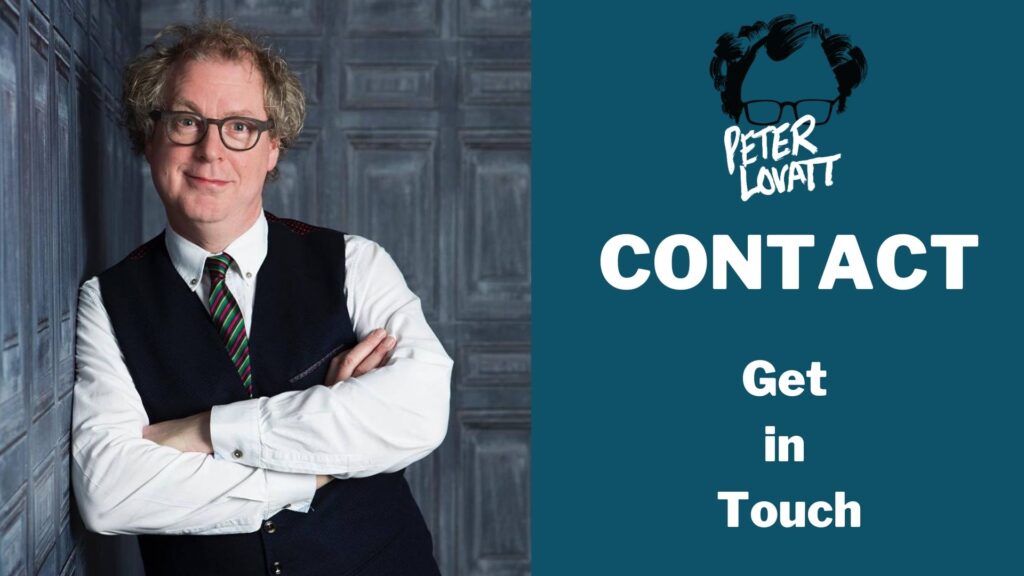 If you fancy a chat you can get in CONTACT.

I’ll leave you to browse, and if you need anything, just let me know. 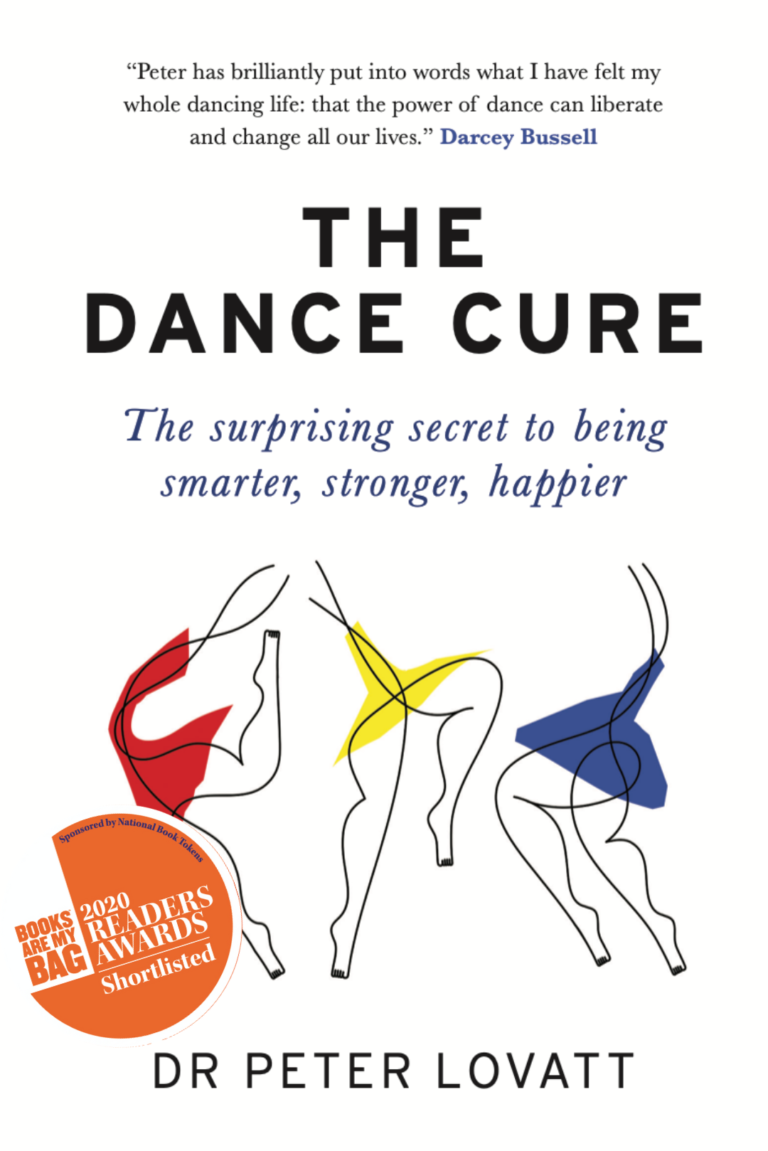 Peter Lovatt is the author of The Dance Cure

The Dance Cure, the surprising secret to being smarter, stronger, happier, was published in the UK by Short Books on the 2nd April 2020.

Dance Psychology: The Science of Dance and Dancers, was published in 2018.

Peter has been invited to write articles on dance by the BBC, and the Wellcome Collection and has written a collection of academic research papers on dance, memory, thinking and problem solving, improvisation, language learning, neural computation and Parkinson’s disease.